Data reveals that mostly mid-to-long term holders were selling their Bitcoin during November, thus being responsible for the correction.

As per the latest weekly report from Arcane Research, mid-term holders seem to be behind the decline in BTC’s price during the month of November.

The relevant on-chain indicator here is the “UTXO Age.” UTXO stands for Unspent Transaction Output; you can think of it as a Bitcoin mechanic that keeps track of coins on the chain.

The UTXO age metric measures how long it has been since a coin on the BTC blockchain was last transacted. Based on the amount of time each coin hasn’t been moved for, the corresponding holders can be categorized into short-term holder (STH), mid-term holder (MTH), and long-term holder (LTH).

Arcane Research takes UTXO age shorter than three months as belonging to STH, and longer than one year as LTH. Holders falling in the period in between are termed MTH.

Now, here is a chart that compares how the supply belonging to the different Bitcoin holders moved during the month of November: 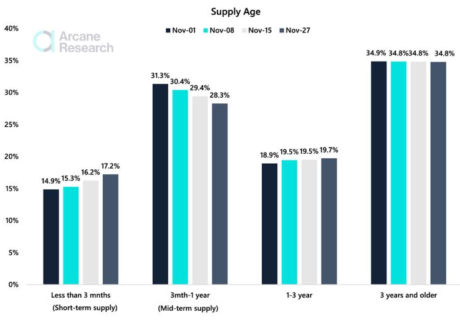 As you can see in the above bar graph, the Bitcoin short-term supply saw significant growth during the period as it went from 14.9% at the start of the month, to 17.2% at the end.

This growth suggests that some holders in the longer age bands sold off their coins. From the chart, it’s visible that the MTH supply had a sizeable drop during the month.

This means that most of the increase in the Bitcoin STH supply can be accounted for by the sell-off from mid-term holders.

Also, the one-to-three year supply saw some increase as well. This means that part of the MTH supply matured and entered into this longer age band.

The 3-5 year supply also had a slight decrease in November, suggesting that some of these long-term holders reaped their profits, and thus added to the increase in STH supply.

So in conclusion, selling from mostly mid-term holders with some long-term holders may be behind the correction in November.

At the time of writing, Bitcoin’s price floats around $55.5k, up 2% in the last seven days. Over the past month, the crypto has lost 11% in value.

The below chart shows the trend in the price of BTC over the last five days. 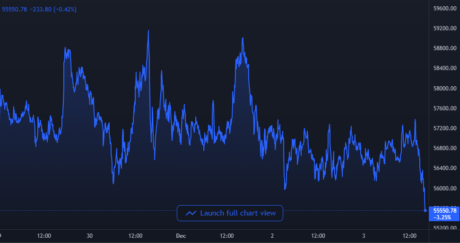